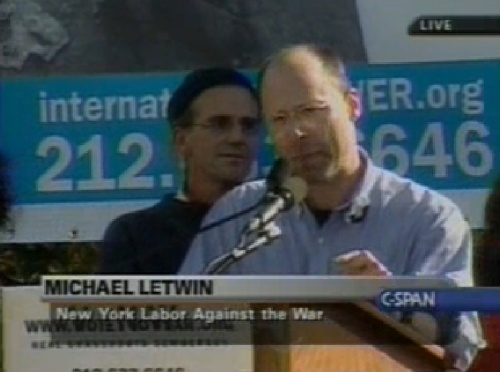 Protesters gathered across from the Vietnam Veterans’ War Memorial to speak out against the Bush administration and possible military action in Iraq. Musicians also performed on stage in between speakers.

Clarence Thomas, ILWU Secretary-Treasurer, Local 10 of the Longshoreman’s union in San Francisco provided a further perspective. “You are the true fighters for social justice and peace,” he said, noting in addition that his union was one of the first to come out in opposition against war with Iraq. “Let the Iraqis make regime change, not Bush,” he continued. He reminded us that his union’s refusal to unload cargo from South Africa had been an initial provocation that led to the end of Apartheid there. Additional support had been offered in 1999 when his union shut down in support of the WTO and also supported the freeing of the political prisoner Mumia Abu-Jamal. He referred further to Bush’s threat to use the military to unload cargo if the current alleged slowdown in cargo unloading persists. “Hands off the dock! Stay out of Iraq!” he warned. . . .

Close to two hundred different labor organizations so far have endorsed the protest marches on October 26. Michael Letwin, president of UAW Local 2325 in New York and also Legal Aid Attorneys, representing the organization NYC Labor against War, spoke next. “So many workers died in the illegal, immoral war in Vietnam,” he said. 1200 unionists signed a petition opposed to terror wars in Africa, Iraq, and anywhere else, he continued. “In recent weeks alone, other unions are protesting the war all over the country.” He referred to 400,000 workers who protested in England recently and said that we can make this country work as they did.

[The following was included in the packet of materials distributed at the October 19 NYCLAW Organizing Conference, which was attended by more than 100 people; additional conference materials are forthcoming]

Year One of New York City Labor Against the War
October 25, 2002

New York City Labor Against the War (NYCLAW) was begun in first days after September 11 by a small, interracial group of elected local union officers and rank-and-file union members. Its dual purpose has been to serve as an antiwar pole within labor, and as a labor pole within the antiwar movement.

NYCLAW was founded on the premise that, much as Vietnam Veterans Against the War had a particular credibility and obligation in the 1960s and ’70s, trade unionists who have directly witnessed and suffered from September 11 have a special role to play in dissenting from enthusiastic support for Bush administration’s “war on terrorism” voiced by most of U.S. labor officialdom.

On September 27, therefore, NYCLAW issued a written statement arguing that workers in the United States should oppose the war-both abroad and at home.

Unlike either the pacifism or generalized anti-imperialism which characterizes many antiwar statements, NYCLAW is a conscious attempt to outline, without lapsing into left sloganeering, why the war undermines with the collective interest of workers in New York and beyond.

Within days, the statement had been signed by scores of New York metro area trade unionists, including a small, but significant number of elected union officers. All but one of these officers spoke in an individual capacity.

The early exceptions were officers of AFSCME DC 1707, which represents some
25,000 workers at non-profits with city contracts, and which is the only union body in New York City to have officially endorsed NYCLAW.

(Antiwar statements have been subsequently adopted by PSC-CUNY/AFT Local
2334 and by SEIU Local 1199, the largest union in the state of New York.)

In the subsequent year, NYCLAW’s statement has been endorsed by some 1,200 trade unionists and labor bodies, from New York City and across the globe.

NYCLAW participants are, by any standard, few in number, and the organization has been virtually ignored by the mass media.

Yet, by voicing a labor antiwar position from the moral high-ground of “Ground-Zero,” the group has faced surprisingly little hostility from workers or even labor officials.

Just a month after 9/11, for example, the New York City Central Labor Council president told the press that NYCLAW signers were “entitled to express their own views.”

Similarly, in November, the International UAW’s magazine reported that “[d]espite his proximity to the [September 11] attack, [a UAW local president active in NYCLAW] is opposed to a military response or an ethnic response, or to have the disaster turned into a pretext for an assault on civil rights.”

Shortly thereafter, the UAW summarily rejected a demand for removal of this local president for his antiwar activity.

In the subsequent year, NYCLAW and its members have continued to play a modest, but important role, as reflected in:

*Wide circulation of the NYCLAW statement via hard-copy and the internet, including spontaneous translation into Arabic, Spanish, French, German, Italian, Russian, Turkish, and other languages;

*Initiation of proposed antiwar resolutions within AFSCME DC 1707, PSC-CUNY, SEI; Local 1199, and at international conventions of the Transport Workers Union (TWU) and of American Federation of State, County and Municipal Employees (AFSCME);

*Affiliation with the New York Coalition for Peace and Justice, which sponsored a 10,000-strong protest on October 7 in New York City.

*December 12 labor forum on civil liberties and immigrant rights attended by about 100 people;

*Days of NYC Labor Solidarity with Immigrant Detainees in Brooklyn, in March and September 2002, endorsed by some sixteen labor bodies and attended by nearly 400 people.

*May 21 protest against trade union investments in State of Israel bonds.

More broadly, NYCLAW representatives have spoken at numerous antiwar events, including the 100,000-strong London antiwar demonstration on November 18, and at the 25,000-strong February 2 Counter-WEF protest in New York City.

In an effort to unite broad antiwar forces nationally, NYCLAW was one of four host organizations for national antiwar protests in D.C. on April 20, and is an initiating endorser of the upcoming national :Stop the War on Iraq” demonstration on October 26.

On October 19, NYCLAW held its first one-day organizing conference, attended by more than 100 trade unionists from NYC and beyond.

NYCLAW’s modest work from Ground Zero demonstrates the great need and potential for a labor antiwar voice even–and perhaps because of–the trauma of 9/11 and subsequent events. The Bush administration’s impending war on Iraq is likely to generate a much broader level of working class antiwar sentiment.

NYCLAW’s statement and signatories thereto are available on-line at: http://groups.yahoo.com/group/LaborAgainstWar/files/ .

[*Affiliation for identification only and does not imply organizational endorsement.]