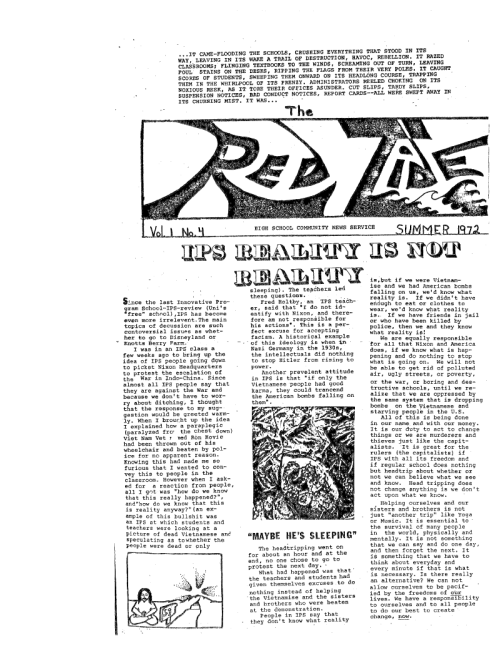 IPS Reality Is Not Reality
[By Michael Letwin]

Since the last Innovative Program School-IPS-review (Uni’s “free” school), IPS has become even more irrelevant. The main topics of discussion are such controversial issues as whether to go to Disneyland or Knott’s Berry Farm.

I was in an IPS class a few weeks ago to bring up the idea of IPS people going to picket Nixon Headquarters to protest the escalation of the War in Indochina. Since almost all IPS people say that they are against the War and because we don’t have to worry about ditching, I thought that the response to my suggestion would be greeted warmly.

When I brought up the idea, I explained how a paraplegic (paralyzed from the chest down) Viet Nam vet named Ron Kovic had been thrown out of his wheelchair and beaten by police for no apparent reason. Knowing this had made me so furious that I wanted to convey this to people in the classroom.

However when I asked for a reaction from people, all I got was “how do we know that this really happened?” and “how do we know that this is reality anyway?” (An example of this bullshit was an IPS [class] at which students and teachers were looking at a picture of dead Vietnamese and speculating as to whether the people were dead or only sleeping.) The teachers led these questions.

Fred Holtby, an IPS teacher, said that, “I do not identify with Nixon, and therefore am not responsible for his actions.” This is a perfect excuse for accepting fascism. An historical example of this ideology is when in Nazi Germany in the 1930s, the intellectuals did nothing to stop Hitler from rising to power.

Another prevalent attitude in IPS is that “if only the Vietnamese people had good karma, they could transcend the American bombs falling on them.”

The head tripping went on for about an hour and at the end, no one chose to go to protest the next day.

What had happened was that the teachers and students had given themselves excuses to do nothing, instead of helping Vietnamese and the sisters and brothers who were beaten at the demonstration.

We are equally responsible for all that Nixon and America does, if we know what is happening and do nothing to stop what is going on. We will not be able to get rid of polluted air, ugly streets, or poverty, or the war, or boring and destructive schools, until we realize that we are oppressed by the same system that is dropping bombs on the Vietnamese and starving people in the U.S.

All of this is being done in our name and with our money. It is our duty to act to change things or we are murderers and thieves just like the capitalists. It is great for the rulers (the capitalists) if IPS with all its freedom and if regular school does nothing but head-trip about whether or not we can believe what we see and know. Head tripping does not change anything if we don’t act upon what we know.

Helping ourselves and our sisters and brothers is not just “another trip” like Yoga or music. It is essential to the survival of many in the world, physically and mentally. It is not something that we can say and do one day, and then forget the next. It is something that we have to think about every day and every minute, if that is what is necessary.

Is there really an alternative? We cannot allow ourselves to be pacified by the freedoms of our lives. We have a responsibility to ourselves and to all people to do our best to create change, now!

[Historical Note: The Red Tide was a revolutionary high school underground newspaper and youth organization that existed from 1971-1981. See: http://theredtide.wordpress.com/]

On May 19, at the First Unitarian Church, some students from southern Viet Nam put on a program to share some of the Vietnamese [culture] with us. This culture is one of war and struggle, and also one of beauty. Many beautiful songs and poems have come from these people. The students read and sang some of these poems and songs. They also showed a film about the French defeat at Dien Bien Phu in 1954.

Jane Fonda and Tony Russo asked one of the students what would happen to him when he went back to South Viet Nam. He replied that he would probably be arrested, put in jail and tortured. He said this with courage. . . .

During the speaking and singing, some slides were shown of Viet Nam and its people. . . . An American folk singer, Ruthie Gorton, sang about their oppression. Hearing these students speaking and singing made me feel even more strongly that this war should be ended and that we cannot stand by and let the Vietnamese people be exterminated.

[Historical Note: The Red Tide was a revolutionary high school underground newspaper and youth organization that existed from 1971-1981. See: http://theredtide.wordpress.com/] 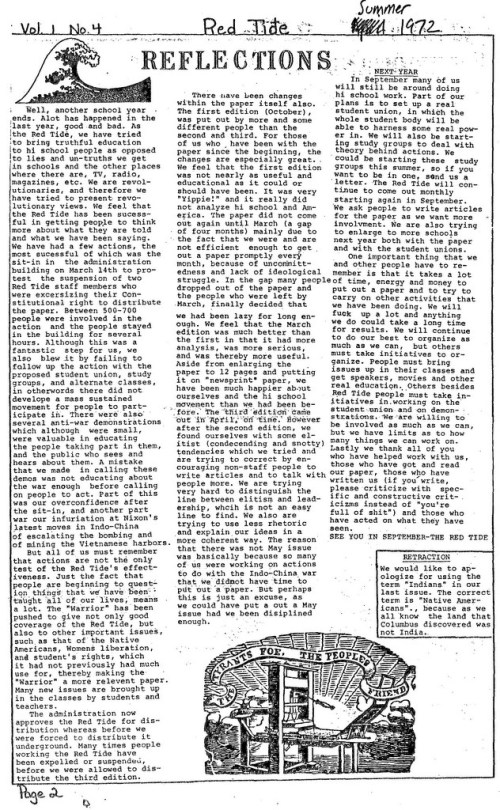 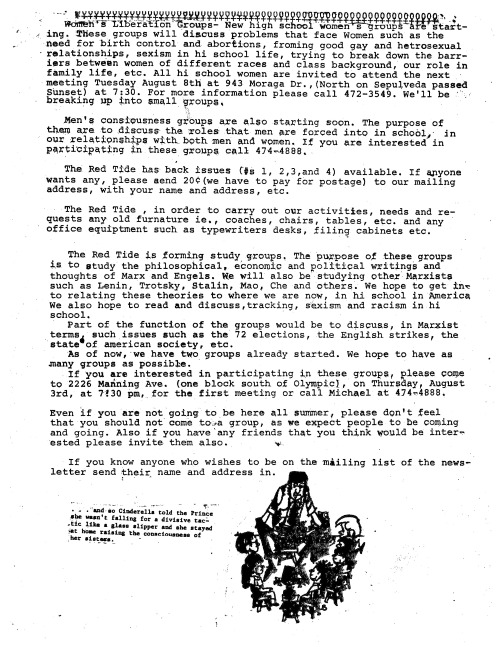